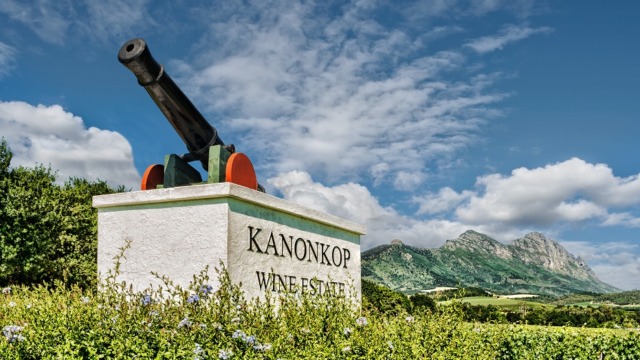 Kanonkop Estate is situated on the lower slopes of the Simonsberg Mountain in the Stellenbosch Region of the Cape and confidently boasts with some of South Africa’s most premium wines.

Kanonkop is a fourth generation family estate, which was originally purchased by JW Sauer, a cabinet member in the parliament of the Union of South Africa. This estate has since then been handed down from father to son for over 40 years and is now in the talented, capable hands of its current owners Paul & Johann Krige.

The name Kanonkop was derived from a kopje (hillock), from which a cannon was fired in the 17th Century to alert farmers in outlying areas that sailing ships plying the waters between Europe and the Far East had entered Table Bay for a stopover at Cape Town.

Kanonkop Estate has been described by those in the know as being the South African equivalent of a Premier Cru or First Growth.  International awards accumulated over more than a decade have gone a long way to substantiate these claims.

Other producers from Stellenbosch

Kanonkop – The Making of a Legend Book

Sumptuously illustrated with modern and historical archival photographs, this is a book for wine-lovers, travellers who enjoy learning of new places and simply anyone interested in discovering the heart of one of the world’s truly special places where people, nature and wine live in harmony.

Dark and brooding the 2017 vintage is a wine filled with poise and precision, waiting to unleash the promise of this majestic vintage.

Golden Amrita – Nectar of the Gods